Spring really, really is coming. Of course, so is the Fourth of July, and Christmas, and another Spring, and so on. But we need to have something to hold on to today, during one more snowstorm, one more day off from school. I guess I must have realized I needed the boost when I bought these flowers a couple of days ago. 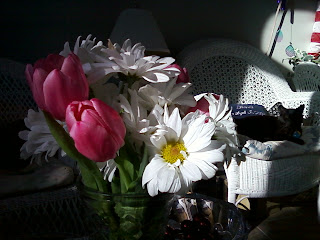 Not just a boost from the weather, but from other things. I have to actually almost laugh at my carefree post of yesterday, stating that "all are healthy" or some such innocent comment. Truth is the Young Prince is ill again.
Again.
I cringed internally when he said yesterday, "my stomach was a bit upset in school." But he had an appetite, and ate a nice after-school snack of fresh fruit and some cheddar cheese. (The cheese might not have been the best choice - since we are trying to watch his fat intake).
But he wanted a shower. That doesn't usually bode well. To explain briefly, whenever Tom feels ill, he showers. A lot. It's not an obsession with being clean, his need is for the calming heat, rather like a hot tub, (closest he can get to a hot tub since they are verboten.) However, yesterday he actually wanted to wash. With soap and everything. So I took heart.
And even better he was pumping away on his homework between showers. So...he didn't really seem as sick as he's could have been. Dinner time came and he did have an appetite. Not huge, but decent. Even asked for nachos after the dinner. So I made those too, trying not to use too much cheese.
Things seemed OK, but I could tell at bed time he wasn't really himself. Or he wasn't his "healthy" self. He asked for the neck-warmer (those neat cloth sacks filled with cow-corn and are microwavable), and really wanted the cat with him.
Evening progressed uneventfully until about 1:30 AM with the first vomit. The wild storm outside matched the churning of his poor tummy. But he went back to bed quickly and slept well till this morning. Then another shower, interrupted by more vomiting. A bit concerning, the color was too green for my liking - and we may call Boston later.
Of course I want this to clear up quickly for all the obvious reasons. But in addition, Tom is supposed to be interviewed by The Lowell Sun tomorrow, they have been talking since last fall about running a feature on him.
Well, we'll see.
Spring is coming. I just have to hold on to that - with the fierceness of the Lion that the season is associated with.
Posted by M.K. Williams at 11:09 AM No comments:

I've been reading some other blogs lately, and feel immediately jealous, yet still inspired...and grateful.

A colleague of mine, Lisa McKay, has been posting some yummy sounding bits on Facebook about what she's making for dinner. She is a former executive editor over at Blogcritics but now she's writing more about food and gardening. How wonderful! Not that writing about current affairs or the latest TV show is a bad thing at all, but I love the flair she brings to something simple.

Another blog I just started reading is something called Moments of Perfect Clarity. The author knows stuff about sewing and is a quilter, which initially would - well not exactly turn me off - but not excite me so much either. But that's OK. She has some very gorgeous photography that's worth checking out, and her posts are actually quite interesting. She's an expat living currently in Denmark, and she seems to enjoy shopping, decorating, and railing at life's inequities. Works for me! Oh, and I'm definitely inspired to add more of my own photos to this blog as well, like this picture of orphaned flower blossoms that fell of the stalks. But they got a second chance to shine while in my Waterford sugar bowl.

Another blog that's wicked cool (as we say here in New England) is Face to the Sunshine. Miss Sunshine is a personal friend that I met in karate class some years back. Although she was always very pleasant, I didn't think we had that much in common at first. Miss S. was a homeschooling mom, something that I could never imagine doing. Not just the challenge of keeping up with the curriculum, but the challenge of spending THAT much time with my kids. Of course, I spend a lot of time with them anyway, but the homeschooling concept, though a great plan for many families, kind of gave me the willies. Anyway, Miss S. proved to be a great friend, a fantastic friend, a fun friend. And we have LOTS in common, besides a love of karate. Coffee, chocolate, good writing (and she's quite a good writer), exploring...and much more. Her blog is a general "slice-of-life" type affair, and very well done.