Today I had my first ever Hot Pocket. It didn't suck, so that's a bright spot. It's not something I'd want to look forward to every day - but it didn't suck. I said that already. And it's funny, that on a day after Thanksgiving, I'd have a freakin' Hot Pocket to begin with. With all this food in the house, we have no food, to like - eat. Sure, there's some leftover pie. And the yummy mini-quiches. And some crabmeat and artichoke parmesean dip. Another yumm-o.

But, I had 3 mini quiches for breakfast. And later a mini cinnamon roll. And then later on a lemon poppy seed muffin. And I wanted something normal for lunch. But I realized the deli meat was dicey, same with the leftover chicken from the great Call of Duty 5 lost weekend. I had made a chicken casserole when our friend Dave (AKA known as "Captain Awesome") stayed over. But, umm, that was *cough* a couple weeks ago. I had planned to make chicken salad with the left over cubed up chicken, but never managed to do it. But the poor cubes still sit in their little plastic storage thingie - sick with the knowledge that they are doomed for the Top Secret penicillin experiments (covertly engineered by Massive Dynamics).

So, I peeked in the freezer. The other day I picked up some frozen/junk food type items. Taquitos. Burritos. French Bread pizzas. Yuk - nothing appealed, but then I found the breakfast Hot Pocket - and well, it didn't suck!

But the funny thing about the little HP. It comes with a special 'sleeve' for crisping. Or browning. Or both. But one must do some folding and tearing with these little 'sleeves'. It's very odd. I'm not a stupid person, but it took me a minute to get it.

It's nuts though, because the Pocket itself, is not that big...it's nearly pointless to take the time to build this sleeve contraption, just so someone can 'eat it on the go'. Eat what? It'd be gone before you start your car, or put on your backpack.

So, after I started eating mine in its little sleeve (I can see why they don't call the sleeves "pockets"), I realized why it had the sleeve.

I suppose some dumb kid (sorry..but they are dumb sometimes - I have two, I know) burned himself on the pastry, and now they are putting these swell sleeves in the packages. Too bad they don't keep you from burning the inside of your mouth. I guess I'm still a dumb kid too.
Posted by M.K. Williams at 1:44 PM 1 comment: 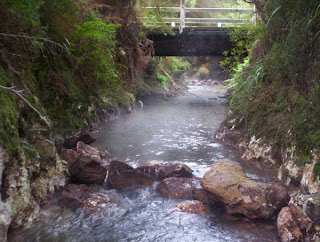 Why does all the sadness, the frustration,

and the deep longing not seep out of my pores

How can it be that this quiet, secret love

does not drip and drip and form streams

and puddles flowing from me along the floor,

out the door, down this street and through

that grove and cover miles until

it reaches the very heel of his foot?

Would he look down and say,

Do I lift my foot to avoid getting wet?

Do I bend down and drink from this stream?”

"Or do I just collect the liquid love,

bottle it and keep it where I can see it

(from Long Ago)
- Photo from New Zealand Hot Pools