I constantly struggle with knowing whether I’m doing the right thing. A few years back sometimes that struggle was about parenting – actually many of the struggles were about parenting I should say. And sometimes, then – and now – I wonder if I’m making the right moves in marriage. Compromise more? Stand up for something because of principle? Who knows?

Currently, both these struggles merge together like tangled dirty ribbons, forming a skein of tenuous responsibility mixed with obligation that wraps too tightly around my creative soul. I know, that makes me sound like a whiney whiner. A selfish whiney whiner. But shit, as any of the current experts will tell you, it’s a crime to extinguish that dingy glow that comes from the left brain. Even the book of Mathew reminds us: “Neither do men light a candle and put it under a bushel, but on a candlestick, and it giveth light unto all that are in the house.”

Thus, I get all mixed up and verklempt-ish when I try to organize my writing career again and again. I feel like I’m letting everyone down by not writing (writing what, I’ll get to shortly), and letting down everyone else – if I don’t. And of course, letting myself down no matter what the heck I end up doing. There’s no pleasing me!

This whole finding the balance is exhausting. Yet, there can be a balance, compromise, give-and-take
.
So, what is it I’m supposed to be writing, or not writing? Well, the writing that I love best is the introspective, naval-gazing stuff I’m doing here. Or a version of a soap box Op/Ed piece that will set the world on fire and fix it at the same time. I also love the humorous slice-of-life stuff, riffing off some funny (at least in my head) event or dream fragment or even a text message gone awry. But that stuff’s not going to make much money, unless I was already well known and folks were clamoring for my thoughts on This and That.

Next up is my “Entertainment Writing.” That’s the category I trot out when people ask me what I write. Hey, why not, it’s fun and I’m good at it. But again, not much money in that.

And there’s of course, my WIP – Driving – that’s been fun, and hard work, and it could earn money – but – well I’ve attached too much artificial angst to this project for it to be viable in its current state. Oy.

Most recently however, is business writing, marking consulting, site audits and so on. THIS – is the scariest. While I can write, and I know I can write content, and I know I can come up with some kickass ideas to help a business grow – it’s still a matter of owning the knowledge, being as confident in this as in other areas.

To add to the mix, I very much am enjoying photography again, and would like to devote more time to that. 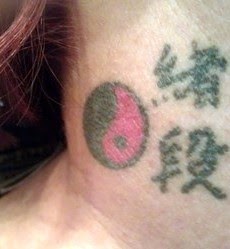 A few years ago I got this tattoo to remind me of always finding balance. Then it was a little more in the realm of martial arts, now it is in other areas of my life. It is a struggle for me. So not much is resolved in this bit of writing, but writing IS being done, and that is a blessing.
Posted by M.K. Williams at 11:43 PM No comments: