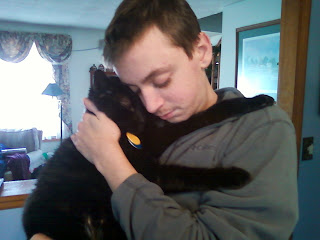 For whoever has been following Tom’s journey these last five years, you know I’ve used the Homeland Security color-coded “threat monitor” to symbolize how things are going with his health issues.

He’s been from green to red and all the colors in between. There have been lots of calmer green and blue times, like a beautiful ocean of health, for which we are all grateful. Extremely grateful. But the last few months have become muddled and murky.

As you may or may not recall, he went through a terrible roller-coaster series of events and complications in a five month period in 2009, from February to July. Too much to recount in this post, but one incident comes to mind now.

Tom had been admitted in June of 2009 with kidney failure. He was given a feeding tube. It was all a bit dramatic. But finally he was being discharged, and he was getting dressed, we were filling out paperwork, and things were OK-ish. Then, one of the doctors came into his room, closed the door behind her and said, “Sit down, I need to talk to you all.”

If ever there was an example of a WTF moment, this was it.

“I need to tell you that one of the staff that has been taking care of Tom during his stay here was sent home with flu-like symptoms and Tom needs to start on an antibiotic right away.”

OK, our hearts started beating again, we started breathing again, and I almost wanted to strangle the serious and concerned doctor for scaring the shit out of us. (And seriously, what color on the chart would we ascribe to this moment?)

Are you fucking kidding me? OK, sure, whatever the flu du jour was at that point shouldn’t be taken lightly, but come ON. After all he’s been though not only this week, but in the last few months…this is such a huge deal right now?

But I didn’t say that. We asked the right questions and continued the discharge process and Tom was fine, no flu-like symptoms followed him home.

And in the intervening years between then and now, he’s still had lots of ups and downs and drama (like a transplant) and lots of cool things, and LOTS OF LOVE.
Ahh, the love. There have been an amazing collection of people expressing amazing feelings of love and support for Tom, and doing some incredible and selfless things. From sending a simple get well card, to sending mountains of gifts – it’s all been so uplifting.

Our network of support, our village, keeps expanding and it’s wildly gratifying. Every time we show up at an ALF event, for example, we feel everyone’s joy for Tom’s health victories, and even their pride in his overall accomplishments, whether it’s getting off a medication, or getting on the honor roll at school – we really can feel the love. It’s tangible. It’s good.

And the same thing happens at family reunions, or a routine trip to his pediatrician for an annual checkup (they rave over his continued improvement), or church – it’s very cool.

Yet, and here is my frail human weariness kicking in, when things go awry, as they have gone quite scarily awry since August, when I have to give a poor health report for Tom, I feel like I’m letting down so many people.

“Oh now Mary, don’t feel that way”, you think. “It’s not like you can help it or are causing it” – and hell, you’re right! But I do feel exactly that. And mind you – no one gives me that impression, that they are disappointed in me, or Tom.

I don’t know exactly why I feel this way, but sometimes I have to imagine that people may only have a limited bandwidth for concern, and maybe they’d like to cross a few people off their lists of Folks to Worry About.

If you add social media to the mix, that’s a whole new way to examine the sharing of news, asking for support, giving support, and then alternately feeling overwhelmed with a whole news feed of illness or – or joy – and the whole pockmarked spectrum of human emotion in between.

And I’ve got to allow that some of this electronic network, the followers or friends or connections, are probably just plain tired of reading the latest blurbs about my Young Prince. Enough already, we get the point, you’ve got a sick kid, yaddah yaddah, the story’s just too darn old! 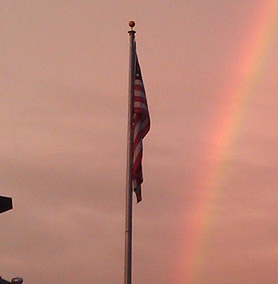 But the reality is most of this angst is created in my head.

So when I do give an honest report on Tom’s setbacks, 99% of the time, the responses are filled with genuine concern. Old friends and new, they care about where Tom is on the color chart. So, I have to trust in that care and love that others continue to shower over us.

Speaking of showers, after the clouds part and the sun cautiously begins to shine again, every now and then comes a rainbow. Beauty after the storm, or in spite of it, that gift is what we receive no matter what kind of news, no matter where Tom falls on the chart.

A beautiful rainbow of true colors.