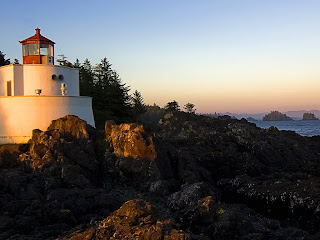 Do y’all remember the poem by Carl Sandburg? I barely did, so here you go:

It sits looking
over harbor and city
on silent haunches
and then moves on.

Pretty nice imagery and the analogy is fairly apt, fog comes in quietly, just suddenly appearing and then it is gone. Cats, hunters by nature, can operate with wonderful stealth. And they do whatever they please, appearing and disappearing without invitation. I can’t see Lewis Carroll using a Cheshire dog*

But my cat? He’s freakin’ loud! I think he needs to have this poem read to him, take a hint or two. Alright, if you must know, he’s perfectly capable of being quiet and stealthy. He’s caught a few mice in 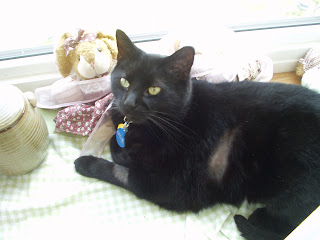 Then again, he seems to have some canine genes, or something. Dogs have a reputation of being very dependent on their owners, not just for food and toileting, but for companionship, for love. And cats are thought to be aloof and rather patronizing. Our Two-Bit is…different.

This kitty LOVES to be petted. When he gets a victim family member nearby, and a wee bit of petting and purring has commenced, he then does “the Plop”. That’s when he arches up his back, getting hindquarters as high in the air as possible, and then just sort of collapses in one heap on the floor, his desire for increased petting and stroking made evident by his posture. This goofy boy rolls to his back in a totally submissive pose, looking more like a dog than a cat, and he actually wants his belly scratched. Oh, and the purring…talk about – he sounds like he is at the starting line at Loudon Speedway.

So, the loud thing I mentioned earlier. When Two-Bit is feeling needy, he follows us around, meowing with real gusto, back and forth. In this room and out. Into the living room, into the kitchen. If the bathroom door is not securely latched, in he stamps, meowing questions or statements – not really sure what it all means. Of course, at certain times of the day he is asking for a meal. And maybe an hour later, he’s asking for a snack. And in the mornings, he’s developed a habit of asking me for attention, I call it “coffee and cuddles”. Sometimes, the minute he sees me with my coffee cup, he gleefully clomps into the living room and hops up on the windowsill, looking at me expectantly. He wants me to sit in the chair by the window and sip my coffee while we both look out the window and of course he’d get petted.

Not that I or anyone else in the family begrudges cuddle time with the kitty. But c’mon, we have our own lives/chores/needs/schedules. It’s like having a two year old following you around asking to play with you all day long, or feed him, or change his diaper, all the while asking “why”.

Bed time is especially hilarious. I’m usually the last one to bed, typically between 11:30 or 12:00. The habit is for the cat to go up to bed with Tom (sometimes Tom has to force the issue) around 10:00, and “tuck him in”. This means that Two-Bit lies on the bed, never in the right position for Tom’s liking (he usually gets a face full of cat butt), or sometimes the cat pounces on Tom’s feet – just for fun. But this tucking-in time only lasts about 10 minutes, tops. Then down the stairs comes the cat, and then he sits and stares at me. The minute I get up off my chair for anything, wee Two-Bit is up and following me around, stomping his feet, meowing, getting tangled up with my feet – it’s not a lot of fun.

And when I am really showing signs of going to bed, he’s so thrilled! The going-to-bed preparations take a few minutes, and Two-Bit follows me every step. Often I finally head to the stairs, and ohhh MAN is he excited – but his fervor is squashed when he sees that I have abruptly turned around because I forgot to turn on the dishwasher, or blow out a candle, or turn down the heat. He’s rolling his little kitty eyes for sure.

So, NOW I am going upstairs for good. Two-Bit races up next to me, and he’ll skid to a stop at the threshold of Tom’s room. He will typically take a few steps inside, meowing really loudly. I infer that to mean that we should check on Tom for a moment, and sometimes I indulge him. Mostly I just keep trying to shush him, as I make my way into my own bed.

Kitty is still mewing, maybe it’s not that loud, but it seems loud, because of the contrast of the very quiet of the bedrooms. Once I’m in bed, Two-Bit paces on the floor, waiting for an invitation to come up. I do invite him, hoping to just shut him up. So then there he is, purring again like a race car, and he comes up to my face and sniffs me. I scratch his chin, and his ears, not for too long, because I’m tired and lazy. Sometimes he licks my forehead, or puts his paw in top of my hands. It’s all very sweet.

And then he’s off the bed minutes later, plodding down the stairs, looking for mischief, or mice. Sure, now he’ll quiet down. 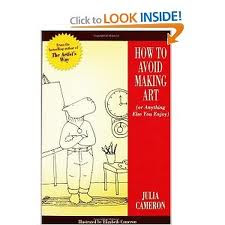 So - right. It's January and time to: manage my money, manage my weight, get rid of wrinkles, overcome my shyness, stop smoking, exercise, learn how to speak a foreign language (merde!), or - last and least - learn to juggle. Those who know me know realize that most of these familiar life change thingies are not my own resolutions, but a few could and should be. Anyway, my point is that I really hate being typical. I hate the flippin' cliche concept that is a grand marketing shtick this time of year - self-help and New Year’s Resolutions.

I don't want to be a cliche!! I don't know why this bothers me so much. Sometimes it seems to me as if people make resolutions solely because the calendar prompts them. Has there been soul searching? Insomnia? Has that person really, really given this a lot of thought?

Well, damn it, I have! And it's high time I did something about my angst. Need to make some good life changes. But now, does this mean that I am one of those unimaginative types? Gym-flocking, calorie counting, Rosetta Stone uttering, ball-dropping sheeple? Hold on now.

This needs to be sorted out.

And then the pace picks up. By mid-October I think I might want a break. But ahead is Halloween, then November comes quick and then it's The Big Holidays - and like my expensive-but-tasty roast - I'm all done. I can't bear to think about much else. Hell, and that's when times are "normal". So it only makes sense that we look to a future time to regain our footing in our life paths.

These last few months brought some odd stomach ailments for Tom. Some of it has been recurring bouts of C. diff., while some of what's been going on has been harder to figure. Problems with digesting fats, or acids getting too active - something isn't right and we've found ourselves in a similar roller coaster of illness that we faced in the extended spring of 2009, and again in the spring of 2010, I guess you could call it the Chronic-Coaster. Of course more recently Tom's illness put a strain on our holiday prep, not to mention his schoolwork, and other things. The good thing is this has nothing to do with his new liver.

But since Tom's health ordeal began three years ago, and I occasionally ride that Chronic-Coaster, it's been taking me longer to recover, to bounce back into normal patterns and schedules. Thinking is muddled, I'm distracted, and naturally somewhat depressed. And a lot of important things get neglected, or at least postponed, à la Scarlett O'Hara, which brings me to the fresh slate month of January. It's probably illusion, but I feel like I have more free time in January. And I want to try to pick up some threads of my former interests and needs.

So, now with that pesky list I opened with. There are things that should have been on the list, and one big one is to write. Anything. Write more often, and write better.

I have several Works In Progress going, and very recently I did some revising - which is great. But I know I need to get back to blogging and blog simultaneously while working on other projects. I know I jokingly blamed Facebook for my lack of blogging, and there’s some truth to that.

Or sometimes I can get caught up in my email. My good friend Mark Saleski and I have occasionally written our share of email screeds a-back-n’-forth about all manner of things. Music, food, our fellow Mondos, the Internet, books – etc. As a matter of fact, just before I had started my re-blogging adventure recently, I interrupted my work to shoot him an email – “do you know that I have tried to spell ‘resolution’ three times, and I keep making a typo?” (And he’s just one friend; I have other email pen pals that I write nice long letters with.) Of course, I had to laugh at the irony, here I was trying to be really productive, and I couldn’t last but a minute before I had to go off into email land. Which reminds me of a funny story.

One day Mark and I had planned to meet for lunch and before that I had been doing some shopping. I had just picked up Julia Cameron’s great book How to Avoid Making Art (or Anything Else You Enjoy). It’s done cartoon style (and tongue-in-cheek) with statements like “tell your most negative sibling your dream, and then listen to their reasons why you shouldn’t do it”.

Basically it’s a humorous way to look at the toxic relationships in our lives or our own bad habits and how they hurt our creativity. I had thumbed through it briefly, and was feeling extra magnanimous and offered to let Mark borrow it for a while. He flipped it open and randomly landed on a page with the illustration of a dog (the characters are mostly all some canine breed) sitting by a computer. The copy reads “write long emails to your friends instead of writing your novel.” Mark just closed the book with a resounding “Fuck you.”

He still borrowed the book though.

But regardless of the source of my lack of productivity, and my aversion to New Year’s Resolutions – I have not been writing enough, and I need desperately to fix that!