I wanted to write this for a long time. Hell, l wanted to write anything for a long time, besides a grocery or to-do list. As most of you know, the last six months have been pretty nasty regarding Tom and his health setbacks. Were these problems caused by his liver and transplant issues? Not necessarily all of it. What does this have to do with the American Liver Foundation and Marathon Monday? Stick with me, and I’ll explain.

When Tom was diagnosed with ulcerative colitis in August it definitely was connected to the diseased that ruined his liver, PSC. PSC – Primary Sclerosing Cholangitis many times presents with some sort of inflammatory bowel disease. Because it has an autoimmune component, right after Tom’s transplant, we were told that Tom could still develop an IBD.

So, that was a bit of a blow. But besides the nuisance of the colonoscopy interfering with a new job and vacation on the Cape, it was not devastating. Colitis CAN be successfully managed.

We are pretty sure that his femur fracture on September 2nd was not related to liver disease, although it was certainly suspect for a while. But still – it was not fun. At all. 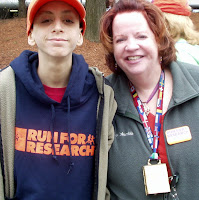 What about the sudden migraine in early February that landed him in the hospital? Well I don’t think there was a direct connection – although it seems there was a connection between that terrible head pain, and the severe bout of cyclic vomiting that Tom went through his first year after transplant. Many sufferers of cyclic vomiting also have migraines. In fact, the stomach issues themselves are often referred to as abdominal migraines.

Migraines are often triggered by stress. Hmm, where did that stress come from? Any guesses?


Then there was the other hospitalization this year, smack in the middle of February vacation. Now we’re really making a connection.

That Tuesday morning Tom felt extra tired and chilled. Then he looked feverish. Took the temp – 102.3 – yikes! Called Boston, were told to bring him in right away, since he was on three different immunosuppression meds (one for the transplant, two for the colitis) – the docs didn’t want to mess around with that.

Of course, probably because I gave him some ibuprofen at home, his temperature was completely normal once we landed in the Children’s ED (Emergency Department – to say ER, well it’s just soo yesterday). But his blood work revealed a startlingly low white blood count, specifically his ANC (absolute neutrophil count). Right there that was reason to admit him.

After a few days, there was no clear cause of this low ANC. But what we did learn was very concerning, and this is the crux here, the BIG connection to liver disease. One possible cause was the medications that Tom was already on, especially 6MP, a drug he was taking for his colitis. (It also used as part of a chemo regimen to treat acute lymphoblastic leukemia).

Because the thing is, Tom does not seem to have a total 100% healthy liver any longer. Because, the thing is, it looks like Tom’s PSC has come back.

You read that right.

Although one of his doctors very recently said that she’s not entirely sure that the PSC did recur – still another doc was pretty certain. Hey, not that we want to look for trouble, and if this has recurred, then we’ll just move forward and think positively and the usual. The consensus is that recurrences typically don’t progress as fast.

But since February, this new knowledge has been pretty tough to handle. The depth of worry has been hard to explain, and harder to go through.

The good thing is, he’s doing pretty well at the moment. He’s got one college acceptance locked so far, another school seems very interested, and he’s going to Prom –

And he started track. You know his goal, don’t you?

He wants to run Boston next year, on the Run for Research Team.

I'm tired of liver disease. I'm angry. There's no one to blame, it's not like that, but still there's anger, there's frustration and there's definitely fear. And we're just one family going through this. There are too many others.

WE NEED TO CHANGE THIS.

So next year, there will be a plea directly from Tom. And this June, there’s another Liver Life Walk – but for now…please, please, kindly consider donating to the following fantastic people running for Tom this 25th Anniversary year, Katie Chisholm, a new match, her first marathon – can’t wait to meet her this weekend! And Courtney Fratto, one of Tom’s transplant nurses, her first outing with the RFR team, she will do great, and Patrick House, his third marathon with the RFR, and his second time running for Tom. Patrick won Season 10 of The Biggest Loser and ran with the RFR team for Tom along with his cast mates Elizabeth Ruiz, Adam Hurtado, and Tracey Yukich.

And we are all so proud to know the following - some are liver patients, or transplant recipients, and are all around good people who want to help. And help they do. And they are all running Boston this year, some for their final year. Please consider donating to: